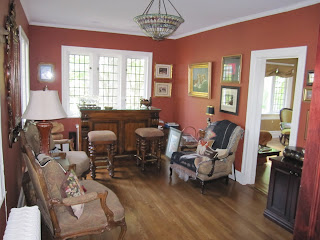 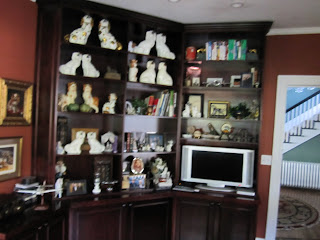 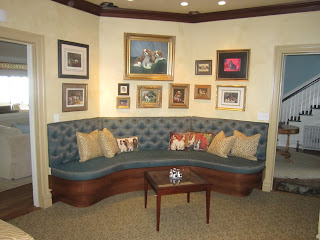 Pub After: Banquette with all King Charles Cavalier Painting above. Banquette was installed where the original bookcase was. 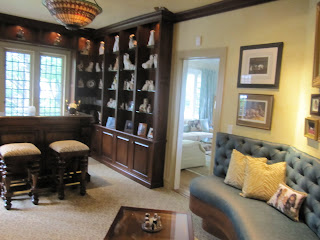 View of Bar Area After
The River House transformation also included a Pub.  Originally it was a menagerie of collectibles,books and occasional pieces that didn't fit well together. The Pub is a focal point immediately off the foyer  and was in desperate need of updating. We decided to give it a theme ,based on all the antique Staffordshire Cavalier ceramics Rob collects on his frequent trips to London. and his pet King Charles Cavalier "Aston". As a result the "Cavalier Pub" was created.

Our goal was to fashion it after an English style "formal pub" that would be a gathering place for Rob's frequent guests. We kept the existing freestanding bar and had our cabinetmaker match the wood and build bookcases with glass shelves for display with cabinets underneath for liquor and additional glass storage.  I designed a kidney shaped banquette that was also built by the cabinetmaker.  The floor is carpeted,bar stools re-upholstered and the banquette upholstered with a button tufted back. The result is  ready for a TOAST!! Here's to Rob and Aston!!!!
RESOURCES:
Carpet: Schumacher Michael Smith  "The Richmond"
Banquette Fabric: Fabricut "Optimum"
BarStools: Fabricut "Fierce"
Cabinets and Banquette by Windhill Builders 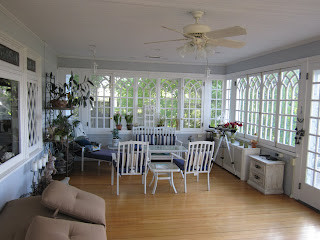 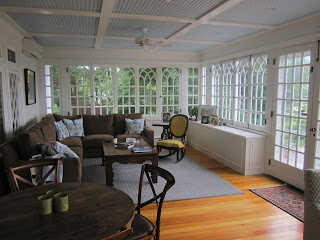 Tray Ceiling with 2 Fans were added along with a sectional sofa. Built in under window holds flat screen TV on hydraulic lift.
The Sun Room before was a poor mixture of outdoor furniture and storage items.  It is very visible from the large living room window so it needed an immediate rescue. The ceiling and ceiling fan were both in disrepair and we decided all the furnishings had to go.  I had Rob hire Mary Scott Architecture to design a new ceiling and add a free standing gas stove.  We wanted to create  seating area's that would allow the river views to be appreciated with the ability to watch TV and enjoy a fire.
RESOURCES:
Sectional Sofa:  Jazz Sectional by Kravet
Sofa Pillows:  Scalamandre "Oasis"
Carpet: Stanton Wool Cambria
Coffee Table: Lorts
Rocker,Oak Dining Table,Standing Lamp, Marble top side tables: Antiques
Dining Chairs: Palecek
Easy Chairs and Ottoman: Tribeca by Kravet
Small occasional tables: Pearl River
Ceiling Fans: Casablanca
Wall Paint:  Benjmain Moore "White Dove"
Ceiling: Benjamin Moore "Polar Sky"